When are you too old? A lesson from my oldest sibling.

Today I got off the freeway to see the brand new corporate office building that will house my brothers company.   He started the company 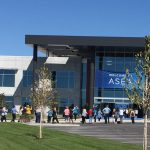 after he retired from working for “the man” in his sixties.

In 1825 Henry Wadsworth Longfellow spoke to Bowdoin College.  His poem Morituri Salutamus is a classic on aging.

We don’t study great poets much these days.  This one warrants some consideration. Who cannot be intrigued by:

The story goes onto to talk about life’s experiences.

In the closing realm of this great address, Longfellow talks of those who started serious life’s works in their later years.

When are you too old?   Research shows that when you slow down to retire, your physical body starts the shut down process.